I signed up to participate in an Operation Write Home card drive through CardMaker Magazine CardSwap Forum, so I checked out the Operation Write Home site to find out the particulars of what they wanted and didn’t want.  One of the things they stressed was using a good adhesive that will stand up to a LOT.  So, I started researching some of the adhesives they listed as being good.  Last weekend I was talking to my folks about it and my dad was asking if I thought one of the adhesives would work on metal as he sometimes needs to adhere a piece in a safe when working on them.  So, I did some testing. . .

To do the testing, I determined to use heavy nuts (the metal kind) on a metal background as I figured that would be closer to what my dad was looking for.  Besides that, if you ever attempted to adhere something that heavy to a card, you wouldn’t be making your card out of paper or mailing it.  I found some metal out in my workshop, along with the nuts and washed them off.  On the right side of the metal piece, I wiped it down with an alcohol wipe thinking that might make a difference in stickability.

The 3 adhesives I wanted to test are:

The Scotch (by 3M) Advanced Tape Glider.  I asked the people at 3M if there was a difference between this one and the ATG 714.  They said there were a couple of differences, but they wouldn’t be apparent to the user.  They do use the same adhesive rolls.  The Advanced Tape Glider I was able to get at Michael’s with a 40 percent off coupon, which made it affordable.  It is, however, pink, so my dad probably wouldn’t be too thrilled with it.  This is the one used at the top of the board. 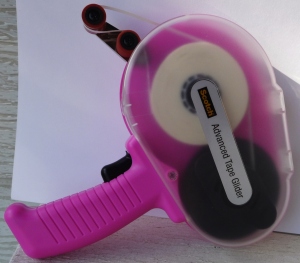 The next adhesive on the board are some glue dots that I made.  One of the wonderful ladies on the CardMaker CardSwap Message board told us how to make these a while back.  I’ll show you at the bottom.  To make them you use Aleene’s Tack-It Over and Over.  You can see I made all different sizes of glue dots.  I used some that were approximately the size of a dime.

The last adhesive I tested was Beacon’s 3 in 1 Advanced Craft Glue.  This is a liquid, so I wasn’t sure how it would work.  This is the one used at the bottom of the board.

I had wanted to do this trial in video form, but I didn’t have anyone available to film it and I started work while still in my pajamas, so you get pictures.  Be glad.

I started applying at the top of the board and working down.  So I started with the Advanced Tape Glider, applied adhesive to the back of the nuts and put one on each side of the board.  I pushed them on, but didn’t hold them at all, just stuck them on, grabbed the camera and took the picture.

Next I used the glue dots, stick one to the top and slightly down the sides and stuck them to the board.  The picture is taken immediately after application.

Finally, I put some of the Beacon’s 3 in 1 adhesive on the back of the nuts, stuck them on the board and took the picture.  Then set down the camera, picked them up as they had immediately fallen off and put them on again.  I didn’t hold them for any amount of time, just stuck them up there again.  There was maybe 20 seconds between putting them on the board the first and second time.  They stuck the second time.  The reason they fell off immediately may have been that I used too much adhesive on them.  I was amazed that they immediately stuck the second time and so quickly, too. 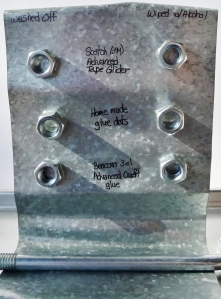 I left the board sitting there for about 1/2 to 3/4 of an hour while I went in, got showered, dressed and ready for the day.  Then I stuck the whole thing in my ice box freezer (the kind you reach down into).  I checked them at just over 1 hour, then took them out at 2 1/2 hours.

You can see the frost all over it when I took it out of the freezer after 2 1/2 hours.

I immediately put it into the oven and set the oven for 500 degrees Fahrenheit.  I used a thermometer to see what the temperature was as I went along.

The first ones to fall off were the Advanced Tape Glider.  The one on the left or washed side was the first to fall, but the other fell almost immediately afterwards.

The next to fall off were the Beacon’s 3 in 1.  They both fell at almost precisely the same time.

Just before my oven got to 500 degrees (higher than the temperature gauge would read on my digital thermometer), the glue dot on the side wiped with the alcohol fell off.  The oven almost immediately got to 500 degrees, then I took the picture and turned off the oven. 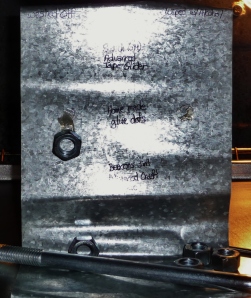 That last one held on by my homemade glue dot kept hanging on.  I had to peel it off.

The only thing I didn’t check was for stickability in high humidity.  This is Arizona and it is extremely dry today.  So, all the adhesives worked quite well, but the glue dots lasted longest in extreme high heat.  I doubt any cards would be getting up to 270 degrees Fahrenheit even when being shipped around the middle east.

MAKING YOUR OWN GLUE DOTS:

Start with a bottle of Aleene’s Tack-It Over and Over and I used a sheet that had held computer labels.  Wax paper or parchment paper would probably work as well.  The bottle is a greenish color with purple on it.

Start making your dots.  This is liquid adhesive, so it runs.  If you get the dots too close together, they will run together.  My sheet also started to bend as the liquid stayed on it, so I had several that ran together.  I tried making teeny tiny ones (I have a difficult time getting rhinestones off with their adhesive still attached), medium sized ones, as well as gigantic ones, though I don’t know what I’ll use them for.  Then you just leave them to dry.  The tiny ones dried to clear within an hour or so, while the gigantic ones I left for about 36 hours.  When they are done, they are clear.  They are very sticky as I barely brushed the sheet with my hand and wound up with some stuck to me.  To save them, just put another sheet of non-stick paper on top and you are ready to go.  If you put them on wax or parchment paper, you could cut the pieces down and stack them with an extra on top.

This last picture is a close up of the large ones so you can see how they look.  You can make them fairly thick, or spread the adhesive out for thinner ones.  I didn’t get any that were paper thin, but it is probably possible.

Thanks for exploring adhesives with me today!