I had a great idea that turned out okay. I used some MFT patterned paper and clear embossing powder, so I would have patterned images.

Unfortunately, you can’t see where stray embossing powder is until inking. Most is covered up with pieces. Yes, I used my embossing tool to powder the entire surface, first.

What do you think? Would google eyes on the squirrels be too much, or add some fun? My son thinks too much. My husband and I just aren’t sure.

The stamp set, as well as the border die I made grass from are MFT products.

ScrapZee is having an emboss resist challenge this week and at least one of our members doesn’t have heat embossing supplies, so I did it two ways.

This first one is also being entered in the MFP SpeedyTV Sketch With A Twist challenge for the week. I masked a panel, heat embossed the flowers in the panel with clear embossing powder, then inked the panel after they had cooled. I also did 3 flowers on another piece of paper, ripped around one of them, cut the center section of another and popped those up on top of my panel. After doing the inking, I used a tissue to wipe excess ink off the embossing. For the sketch part of this, I should say that my popped up flower is the image part of the sketch.

This next one is also being entered in the MFP SpeedyTV Friends of SpeedyTV challenge this week. For this one, I used a white crayon and drew waves on the top part of the card, then used a mask and started inking the water area. After that, I inked the sandy beach and added my sentiment. Looking at it, I thought it was a bit plain, so I added an umbrella to sit under and colored that with colored pencils so you couldn’t see straight through it. After inking, I used a bit of paper towel to wipe off the ink from the crayon area. Yes, my waves would have been better had I been paying attention when drawing them. 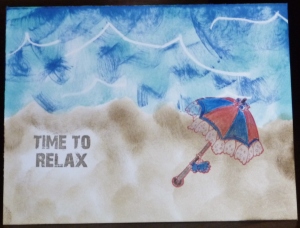 So, two different ways to do emboss resist that are fairly simple.

Happy 4th of July!  It is Independence Day for America, so I wanted to celebrate with some red, white and blue. 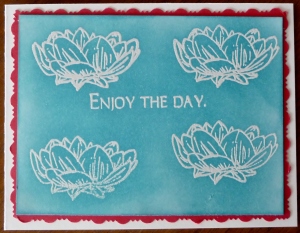 This was made using:

The sentiment and image were stamped on the small white piece using Watermark Resist ink, then embossed with clear embossing powder.  When cool, Broken China ink was rubbed all over the piece, especially in the center of the flower (so it would be darker there).  A paper towel was used to wipe over this piece after all the inking to clean off any ink still on the embossing.  This now looks like white embossing was done without having any white embossing powder.  This is a fun technique to use when you want the background to have either different colors of ink, a blend of inks, or different shading.

All of the pieces were then assembled.

Thanks for spending some time with me today!  Enjoy your 4th of July and be safe!